Hit enter to search or ESC to close

Our College logo is a modern interpretation of St Brigid's reed cross. The flames at the apex of the cross represent the flame or lamp of learning for which she was remembered.

The College colours of maroon, navy, white and teal were chosen to reflect the symbols for which St Brigid is noted.

The maroon represents the flame of learning; white, the colour associated with Brigid, teal green, for peace and reconciliation, and navy for planet Earth, and the love of Creation for which she is renowned. 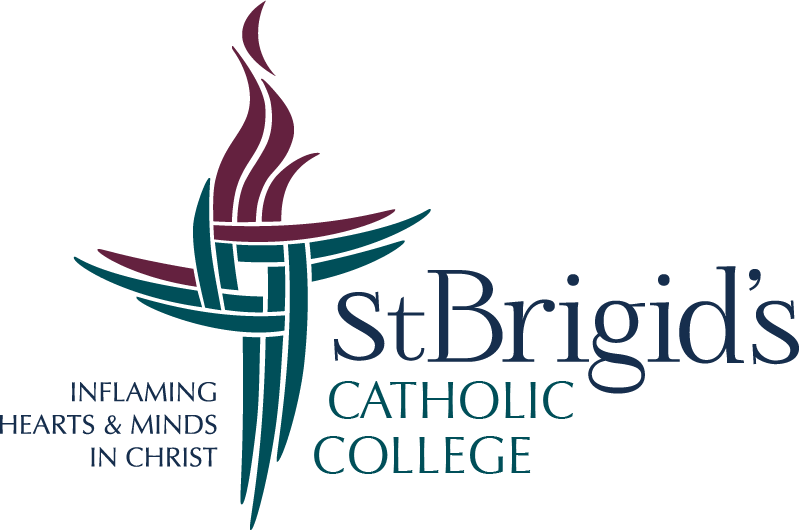 'Inflaming Hearts and Minds in Christ' reminds us of the centrality of Christ in Brigid's life and calls us to centre ourselves on Him.

St Brigid’s passion for igniting in others the love of learning is particularly relevant to holistic learning in the context of a modern educational setting such as St Brigid’s Catholic College. It is hoped that our students are impassioned and that their hearts and minds are set afire with the love of life and learning through the experiences that are offered to them at our College.

In mid-2012 the Bishop of Broken Bay, Most Rev David Walker announced the decision to realise his vision to establish an additional Diocesan Catholic College at Lake Munmorah.

Under the auspices of Bishop David, Mr Peter Hamill, Director of Schools, began negotiations with the local families of the Lake Munmorah area for the secondary college.

Potential students and their parents together with Bishop David gathered in mid-December to celebrate the first step towards the new Catholic college. It was announced that the college will cater for students from Year 7 to 12, and began with a Year 7 cohort in 2014.

The college is named after St Brigid (451-525), a great Irish saint who was a contemporary of St Brendan (484-577). This name provides a direct connection with the broader Lake Munmorah community it serves, and with St Brendan’s Catholic Primary School. Brigid was a pioneer of Irish monasticism. She was an innovator who was co-leader of a mixed male and female religious community, the great monastery of Kildare, renowned for its faith and learning. Therefore, she is a great model for a Catholic coeducational college. Stories abound of her generosity to the poor, her thirst for peace and reconciliation, and of her care of the earth.

In December 2012, Mrs Julie Terry was announced as the founding principal of St Brigid’s Catholic College. St Brigid’s was opened in January 2014, for Year 7.